What is a Subliminal Message? 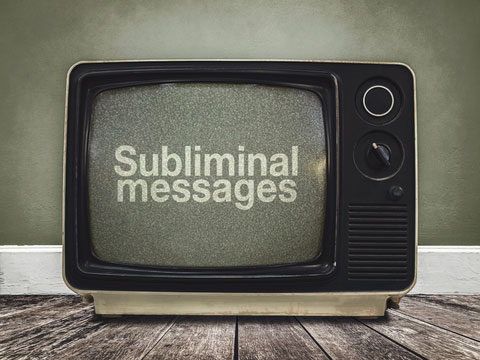 A subliminal message is one of the most misunderstood and underrated performance enhancing tools of the decade. The term “subliminal” is derived from two Latin words, “sub”, meaning under, and “limen” meaning threshold.

A subliminal message is the act of conveying a message directly to the subconscious mind…below the threshold of conscious awareness.

Subliminal programming is a method used to place pre-arranged thoughts or ideas into the subconscious mind and reinforcing pre-existing information stored in the subconscious or to increase a person’s selective attention.

Why Use a Subliminal Message?

Most people still believe that their lives are the way they are because of outside factors like background, environment, education, family, economy, fate or luck. However, it is not these outside circumstances that ultimately determine our lives that make the difference between happiness and success on one hand, or frustration and failure on the other hand.

It is actually the beliefs, thoughts, attitudes and behaviors held at the deepest levels of your mind, as well as your conscious thoughts that make your life what it is today.

Think about this! Outside influences are not the most important thing preventing you from accomplishing your goals. Your own thoughts are. Our lives are often what our thoughts make them. It’s our thinking that makes our lives what they are. Thinking. We are all a product of our own thinking.

Subliminal programming is a method to remove negative thoughts, attitudes, habits and behaviors and communicate positive suggestions directly to the subconscious to affect conscious change to achieve your potential.

Using subliminal messages allows us to access our subconscious mind to change the years of past negative programming from the TV, radio, newspaper, friends, relatives, work and even family. After years of accumulation, these negatives become embedded in our mind, causing doubts and fears that form habits which literally control the rest of our lives and prevent us from reaching our full potential.

Why is this important? We mortals are all creatures of habit. Habits go very deep. There are physical habits, internal habits and habits of thought. They are held in the subconscious parts of our minds. Ans it’s difficult to change the sub-conscious mind.

Decisions we make consciously are all very nice indeed, but they don’t go deep enough. Not deep enough to make real changes or to make them stick. We all know people who make wonderful promises to themselves, only to find they keep slipping back into well-worn patterns.

Perhaps you are one of these people. Most of us are. As an example of a physical habit: If you’ve smoked for years, your mind is programmed as a smoker. All the horror stories about black lungs or how soon you will die may convince you that you need to quit, but quitting won’t be easy, not as long as your mind is still programmed as a smoker. In fact, until you change your subconscious programming, quitting is impossible.

The same is true, not only for physical habits like smoking, drugs, and alcohol, but also for internal habits like procrastination or not managing your time. Then there are the habits of thought, possibly the worst of all because they are so subtle.

You may not even know that you have them. As an example: if you grew up in poverty, you have habits of thinking like that of a poor person, and even if you were to win the lottery or inherit millions, that thinking can keep sabotaging you until you’re right back where you started. Broke. There are habits of thought like putting yourself down, not believing in your own abilities, believing that you will always be overweight or in poor health, that you are unattractive or stupid, or that you will never find a fulfilling relationship – all habits of thought, that can keep you stuck where you are for the rest of your life.

One of the most significant discoveries of modern research has been that of the effectiveness of subliminal programming. With the advent of recorded moving pictures with sound, a powerful new tool was released for directly accessing the subconscious portion of the mind, and so strongly influence it via rapid cues.

Subliminal messages first came screaming into American consciousness in the mid-1950’s when American market/motivational researcher James Vicary demonstrated the tachistoscope, a device used to flash consciously invisible messages on a screen which could be seen only by the subconscious mind. During one six-week test in a Fort Lee, New Jersey movie theater, involving 45,699 patrons, messages were flashed on alternate days over Kim Novak’s calming face: “Hungry? Eat Popcorn,” and “Drink Coca Cola” During the six weeks, popcorn sales rose 57.7 percent and Coca-Cola sales rose 18.1 percent

By the late 1960’s, subliminal messages had been exhaustively tested in eight areas of human behavior: dreams, memory, value norm anchor points, conscious perception verbal behavior, emotions, drives, and perceptual defenses. There is at present, no serious question that human behavior can be influenced by stimulation or information at which individuals, groups or even societies are completely unaware.

Numerous follow-up experiments in other media formats have confirmed, time and time again the effectiveness of this powerful communications tool.

Does a Subliminal Message Work?

Can any of these gimmicks really work? “Absolutely,” says Jagdish Sleth President of the American Psychological Association’s Division on Consumer Psychology. “The controversy has always been over changing people’s attitudes. That you can’t do! What you can do is trigger a prior attitude or disposition.”

“Buying popcorn and soda at a movie theater is acceptable behavior, so a subliminal advertisement about products should work well. Selling a refrigerator in a movie theater wouldn’t work but may trigger the name of the subliminal advertisement when you are shopping for one. A subliminal message put in a horror movie will be very effective. People go to a movie to be scared and therefore their emotions are exposed and because of this their defenses are weakened against accepting subliminal messages.”

Subliminal advertising won’t make Avis number one. A recent study found, for example, that showing the message “Eat Beef” doesn’t induce a craving for beef. It did, however, increase sandwich consumption in general. A consumer’s “preference hierarchy” can’t be changed by these methods. According to Del Hawkins, Dean at this University of Oregon’s School of Business, instead, the effect of subliminal messages will be spread over all similar products. Of course, that limitation doesn’t render subliminal programming useless. In a supposedly dog-eat-dog world, many corporate canines would rather form a pack so that all might dine on a larger piece of consumer spending.

Subliminal techniques were employed in a major motion picture, The Exorcist. The producers were apparently effective enough in inciting fear and terror that their use of subliminal techniques is a major issue in a $350,000 lawsuit against Warner Brothers for injuries sustained by one viewer, when he fainted and broke his jaw shortly after seeing a subliminal death mask. Interestingly enough, William Blatty, the author of the novel on which the Exorcist is based, is a former CIA operative who served as the Policy Branch Chief of Psychological Warfare Division of the United States Air force.

According to previously classified documents, the CIA tested subliminal manipulation in movie theaters during the late 1950’s and a document on these studies speculated “that subliminal projection can be utilized in such a way as to feature visual suggestion” The extent of the CIA research is unknown.

The subconscious mind is where everything we experience in a lifetime is stored. The subconscious mind retains everything. It doesn’t screen information. It doesn’t determine right from wrong, positive, from negative: it just stores everything experienced. For example, have you ever heard a song on the radio that you hadn’t heard for many years and start to sing along with it? Did you ever try to remember something and say, “it’s right on the tip of my tongue?” Sometimes you remember right away and sometimes it will come to you later. Most often, you do remember. This is because your subconscious mind and the latter’s storage bank scanners are at work looking for the answer. If the information has been stored at some time, the answer will come to you.

Many scientific studies have proven that if the subconscious mind is intentionally programmed with positive thoughts and ideas, that soon the conscious mind will begin to act with the information it has received and positive results can be easily obtained.

Subliminal messages enter the brain at a level high enough for the subconscious mind to see, hear and understand, but low enough so that the conscious mind is not aware and will not block them. In this way, subliminal messages are able to remove negative thoughts, behaviors and habits and to communicate positive suggestions directly to the subconscious.

So the primary reason subliminal messages are so influential, is because they bypass the critical filtering aspects of the conscious mind. They go directly to the regulating files we keep to direct our behavior.

(1) By enlivening and activating healthy wishes and drives already present in one’s unconscious.

(2) By imparting new and useful information into one’s unconscious mind.

Using subliminal messages, we are able to remove negative thoughts/ideas behaviors and habits and communicate positive new suggestions directly into the subconscious mind.

The subconscious mind cannot cause behavior contrary to a person’s subconscious motives, drives and values. “In short, a subliminal message cannot force anyone go do anything they wouldn’t want to do”.

Subliminal messages only reinforce, trigger these subconscious motives, drives and values and through positive reinforcement, make them more influential on conscious behavior.

How to Structure Subliminal Messages

Your brain is the most incredibly complex data processing system on the planet. For centuries, scientists have been unraveling the mysteries of how this complex organ works. It was only recently that the separate functions of the right and the left hemispheres of the brain have been identified. Herein lies the most exciting clue yet uncovered for harnessing the unlimited powers of your brain and eliminating the self-sabotaging habits deeply embedded in your subconscious.

Brain researchers have documented the differing reactions of the two hemispheres of the brain to subliminal messages.

The Left Hemisphere: The left hemisphere of the average right-handed person is the more cerebral. It predominates speech, reading, writing, and thinking (controls your logic and reason centers). It analyzes the information it receives and organizes it into a logical framework. To sidestep your rational left hemisphere’s resistance to positive messages that may conflict with its negative habits, use permissive messages such as, “It’s OK to succeed,” (using direct statements can trigger all kinds of negative self-talk from the left brain, such as, “succeed? I’ve never succeeded at anything. What makes this time different?”).

The Right Hemisphere: The right hemisphere in contrast tends to be more involved with feelings, visual impressions, and creativity (controls the creative, intuitive mind), and is non-discriminating. It absorbs information without question or analysis. It is here that early childhood messages such as, “you’ll never amount to anything,” are stored, although you may not be aware of them. No matter how much you try to re-program negative messages on the conscious level, the emotional imprint is so deeply embedded within the subconscious mind that the negative thoughts will prevail. To counteract years of negative programming, use authoritative statements that are readily accepted by the right hemisphere. Such as: “I succeed at everything I do.”